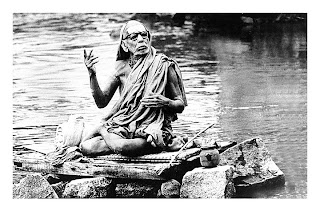 I told you earlier I will tell you about ahamkAra (Ego). That is this matter.

AhamkAra is nothing but the thought of ‘I’ as distinct from Brahman.

That thought is the starting point (dramatically termed as ‘pillaiyAr chuzhi’ in the Tamil world) of the process of evolution of Shiva into a JIva.

‘Laya’ is also known as ‘samhAra’. But I did not use that word lest you may be scared.