Bhakti and its place in jnAna mArga- Part 2 of 3 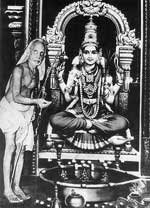 Whereas jnAna and bhakti are known to be two distinct paths to mokSha, it is he who wrote the Viveka-chUDAmaNi for us and chalked out the SAdhanA regimen, which is supposed to take us along the jnAna path. But in that very path, he gives so much importance to bhakti! He says the prime instrument of help for mokSha is bhakti!

In the jnAna mArga, that he presents and publicly preaches for the world, it is not as if there is no place for bhakti. But that place is at the very beginning, at the baseline. In other words it comes even before one starts the four-component-SAdhanA. Even before one gets admitted to his college of JnAna, karma and bhakti are subjects that should have been finished!

The eligibility for proceeding on the jnAna path is a mind which is pure and potentially capable of one-pointedness. Only then can entry be made in this path. In order to get that very eligibility, he prescribed desireless action for purifying the mind and also worship with devotion for disciplining oneself to become one-pointed. In sum, Bhakti is something that is an external component of (advaita) SAdhanA, far removed from the core regimen.

Among components there are what are called external (*bahiranga*) and internal (*antaranga*) components. The internal ones help directly in achieving the objective. External ones stay far away and help indirectly. For example, take a large dinner arrangement. The direct causes are the host and the occasion for which it is held.

The farmer who produced the groceries used in the dinner, the officer who procured them, the shopkeepers who sold them, the cook who prepared the food, the one who supplied the vessels and crockery -- are they not all of them a cause? Among these, perhaps the cook and the servers may be included in the list of ‘internal’ components; but all the others are only ‘external’.