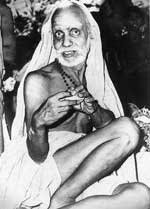 To allow buddhi or intellect to be drowned in the ocean of Brahman comes at the end of the third stage: samAdhi. Here it is ‘samAdhAnaM’. ‘BrahmaNi’ does not mean ‘in Brahman’ here but ‘in matters pertaining to Brahman’ – what the ShAstras and the Guru say about it. This is the right way to understand it.

The purport is that we should direct the intellect to dwell always on the philosophical implications of Brahma VidyA. In the exercise of shraddhA, we made the intellect to confirm (avadhAraNa) the faith in what the ShAstras and the Guru say.

In continuation of the same , as a logical conclusion, the Shastra of the Atman has now to be learnt, by the intellect itself, without any doubts raised by the intellect.

The Guru might add something of his own, which may not be in the ShAstras. That also has to be absorbed in the same way. Realisation or Experience of Brahman (*brahmAnubhava*) comes much later. That is the true Enlightenment.