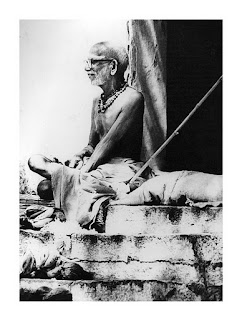 By the statement about the subtle space-point which is the locale for the Atman in the heart, it follows that all around the point there is the heart. That is also a small locale.

The Upanishads use the two words ‘daharaM’, ‘dahraM’ for this. Both mean ‘small’.

The Absolute Reality of Brahman which is permeating everywhere ‘is’ in such a small space.

The entire universe is the cosmic expansion of the VirAT-purushha.

The heart of this Cosmic Purushha is Chidambaram.