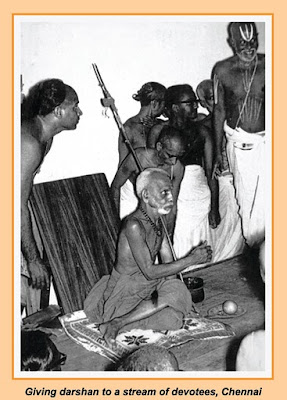 The feeling of bhakti is not one among the many feelings that arise in, and are experienced by, the mind. VatsalyaM (affection), madhuraM (pleasantry) and dAsyaM (servanthood) are often talked about as the indicator-qualities of bhakti.

But there is a mountain of difference between these and the affection that a mother gives a child, the love that spouses exchange with each other, and the submissiveness that a dedicated servant shows to his boss.

Is there not a ton of difference between the affection shown by a woman to a neighbour’s child and the tenderness that she showers on her own child?

Far more than that is the bhakti that a great devotee shows to his god of devotion!

The same degree of difference will there be when love or servanthood are exhibited as bhakti to the Lord!

These feelings arise somehow through somebody and are of a unique class by themselves, far more purified, far more powerful, than ordinary feelings of the mind.